Another one of our self-build projects, another beautiful dog, and another HUGE space to work with. The design was at the forefront of the conversations around this particular kitchen. The space was so vast it allowed us to incorporate two islands, feature a concrete bridge breakfast bar to connect the two islands, a drop-down seating area in the same concrete, three separate sinks with waste disposal, drinks making sink having the Quooker Flex Cube (boiling, filter & sparkling water), two dishwashers, self-venting induction hob, two pyrolytic ovens, two warming drawers, built-in coffee machine, built-in combination microwave, dual-zone wine cooler, tall built-in fridge, and tall built-in freezer.

Storage was never going to be an issue with this huge space but how the kitchen was used became crucial. Having incorporated mostly draws in the island and lots of pullout storage solutions in the other units storage became a very easy thing to manage, this gave the designer the opportunity to create zones in the kitchen, for example, we made sure that the fridge and freezer were very close to where we knew the prep area would be, the ovens sat centrally in the tall units away from the hob or the dishwashers meaning that when the kitchen was being used by more than one person nobody was going to be in anybody’s way. This is such an important thing to consider when designing any size kitchen as usability is key to enjoying any kitchen.
The long six-meter island became such a feature that we decided to make this more interesting by having a drop-down seating breakfast area at the end of the island so the clients could enjoy the views from the vast double height windows. This can give the kitchen a different feel and certainly looks like a multifunctional space that has a very modular contemporary feel.

One of our favourite projects to work on, having such a huge space to work with gives the designer so much freedom to create new areas that the client didn’t consider. That’s our aim here at Coalville Kitchens, to give you ideas that you may not have considered and deliver your dream project. This one was a huge success and the client are absolutely thrilled with the outcome. 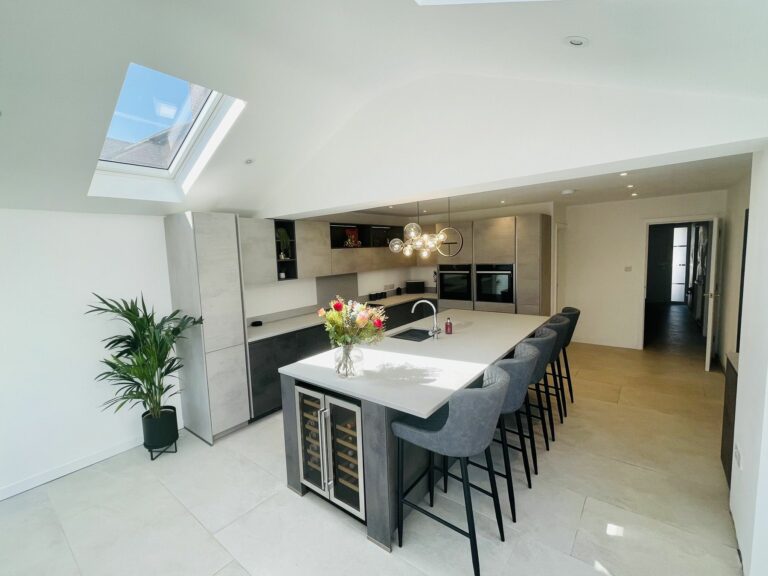 Concrete Grey, Two-Tone True Handleless Nobilia Kitchen, Quartz Worktops Kitchen Features Kitchen extensions make up for a huge percentage of our design work here at Coalville Kitchens. These lovely clients came to us at the begging of the process knowing we get booked up far ahead with our installs. The open-plan kitchen/living/dining space was a… 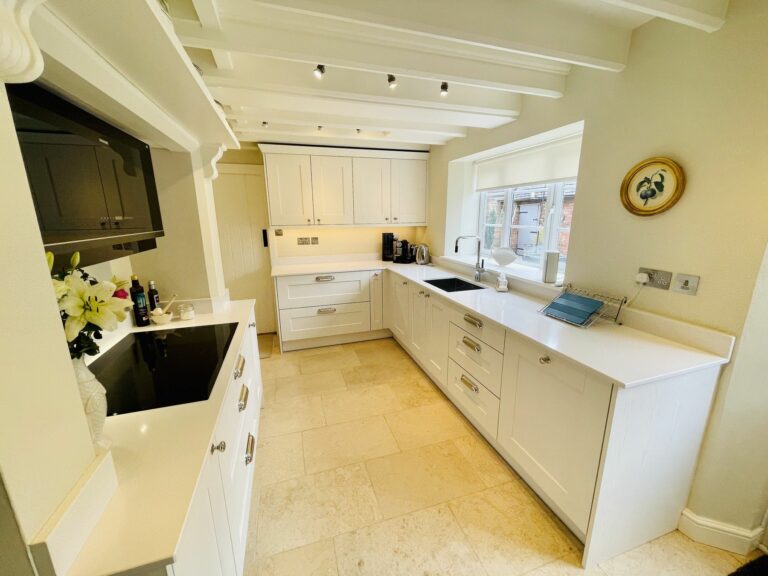 Solid Timber Painted Shaker Symphony, Solid Quartz Ceaserstone Worktops Kitchen Features This charming cottage needed some TLC. The owner purchased the house knowing that the kitchen would need updating and chose Coalville Kitchens to undertake the design and install of this delicate project. It was important to the client and our design consultant that we… 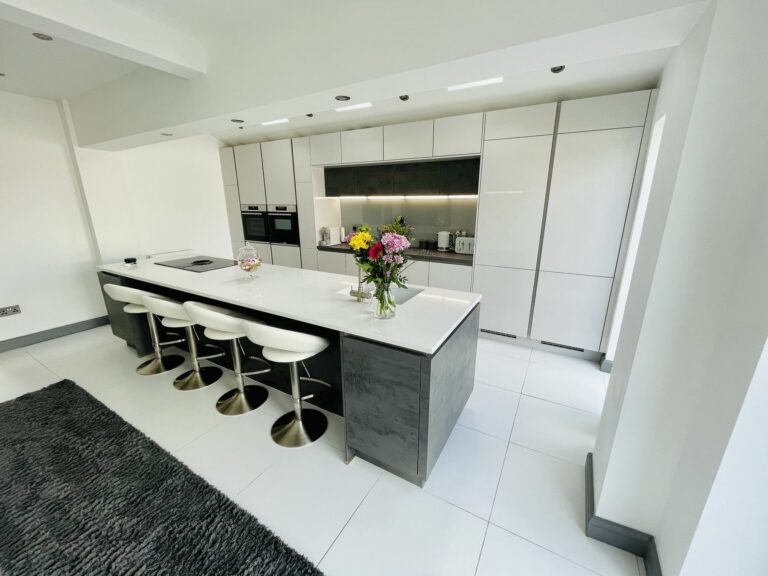 German True Handleless Nobilia Kitchen Kitchen Features These lovely clients came to us right at the beginning of their journey to explore the option of a kitchen extension. It’s wonderful when we get to have a real design input before any kind of build takes place. The brief was to create a space that felt… 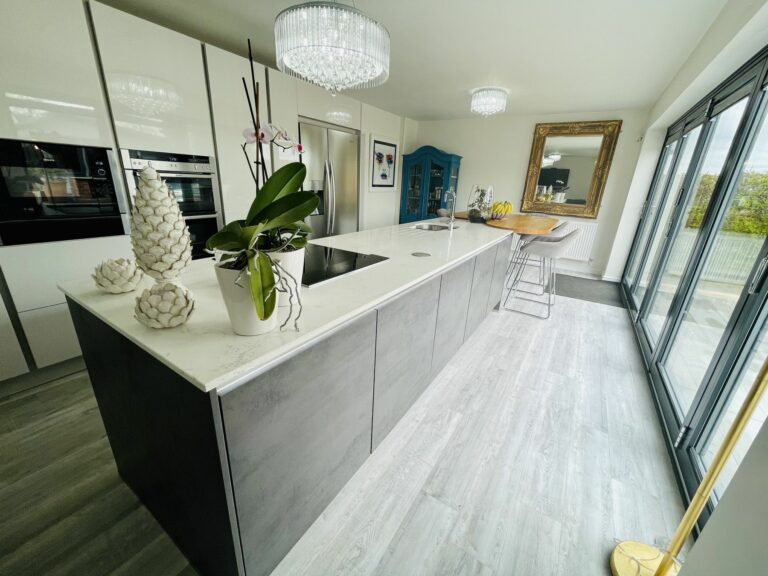 Gloss Slab Door, Concrete Grey, Quartz Worktops Kitchen Features A wonderful client to work with who knew exactly what she wanted to achieve but more importantly had a great eye for detail, style, and design. The space we had to play with gave us lots of options for design but the final layout was achieved… 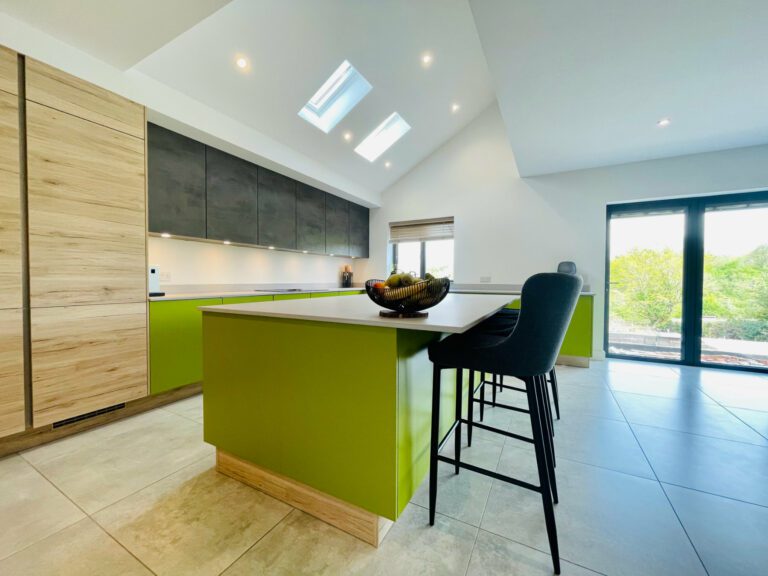 German Bespoke, Two-Tone, Feature Colour, Luxury Quartz Kitchen Features A complete renovation of a wonderful property set in the village of Swannigton, Leicestershire. A lovely family who shared the vision and passion for a bespoke family space that was sure to be an individual project. The first thing that you’ll notice about this project is… 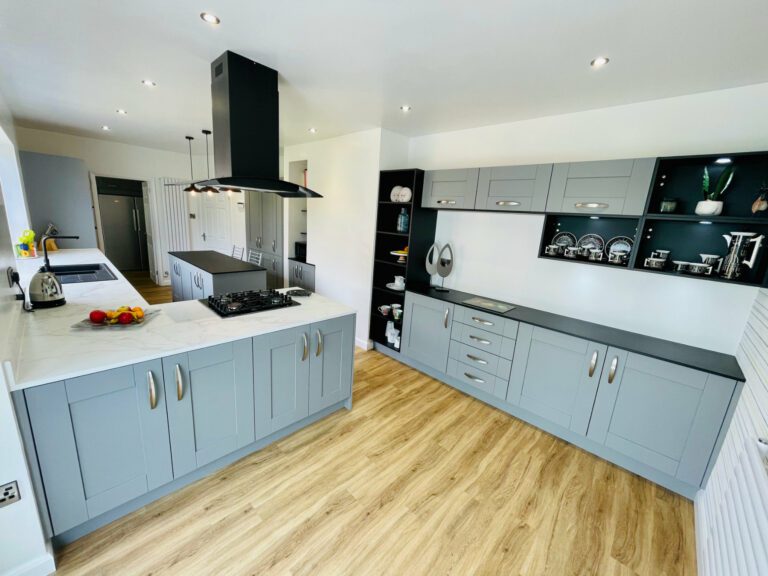 Symphony Shaker Cobble Grey, Nobilia Black Open Units, Luxury Laminate Kitchen Features This Kitchen was originally 2 rooms, we had to remove a wall, install a new window, completely plaster the whole space & carry out all plumbing & electrical work. All of this work was overseen by us here at Coalville Kitchens. The homeowners…

We design and install German kitchens.

We design and install British kitchens.

We design and supply fully-fitted kitchens

We are proud to deliver a First Class client service.

We use cookies on our website to give you the most relevant experience by remembering your preferences and repeat visits. By clicking “Accept All”, you consent to the use of ALL the cookies. However, you may visit "Cookie Settings" to provide a controlled consent.
Cookie SettingsAccept All
Manage consent

This website uses cookies to improve your experience while you navigate through the website. Out of these, the cookies that are categorized as necessary are stored on your browser as they are essential for the working of basic functionalities of the website. We also use third-party cookies that help us analyze and understand how you use this website. These cookies will be stored in your browser only with your consent. You also have the option to opt-out of these cookies. But opting out of some of these cookies may affect your browsing experience.
Necessary Always Enabled
Necessary cookies are absolutely essential for the website to function properly. These cookies ensure basic functionalities and security features of the website, anonymously.
Functional
Functional cookies help to perform certain functionalities like sharing the content of the website on social media platforms, collect feedbacks, and other third-party features.
Performance
Performance cookies are used to understand and analyze the key performance indexes of the website which helps in delivering a better user experience for the visitors.
Analytics
Analytical cookies are used to understand how visitors interact with the website. These cookies help provide information on metrics the number of visitors, bounce rate, traffic source, etc.
Advertisement
Advertisement cookies are used to provide visitors with relevant ads and marketing campaigns. These cookies track visitors across websites and collect information to provide customized ads.
Others
Other uncategorized cookies are those that are being analyzed and have not been classified into a category as yet.
SAVE & ACCEPT
BOOK APPOINTMENT
SHOWROOM
PRICE ESTIMATOR
BROCHURES
HOME MEASURE